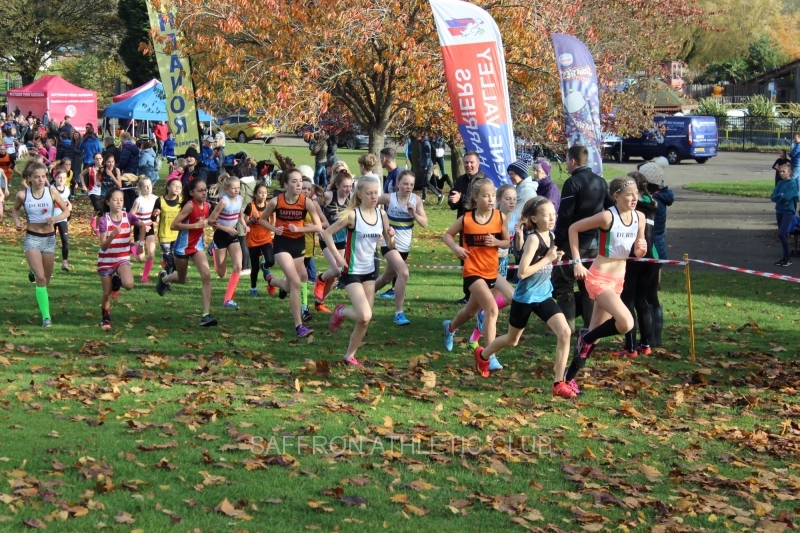 Well. It had been a lovely sunny morning. I had my sun cream at the ready.The park runners had all gone home exhausted but happy. But then we watched anxiously as the sky darkened and the wind increased. Then it poured. And dusk came four hours early!! But that did not deter our athletes from running their socks off. How impressive they all were.

The day got off to a great start when Josh Adkin won the under 11 boys’ race. He ran with great determination, judging his win to perfection. This was very impressive. Josh leads the under 11 rankings after two races.

Our under 11 girls followed this up with two good performances from Amy Aldridge (11th) and Luan Power (13th).  This was Luan’s first race for the club and it was an outstanding result, especially as she was probably the youngest competitor in the race!!  Well done Luan.

Our under 13 boys kept their form with good runs from Kai Clarke-Myers (24th), Dylan Izzet (27th) and Josh Pegg (30th). They are currently standing 4thin the overall positions.

But for team work the Under 13 girls were outstanding. We had six finishers and that strength in depth is what pulled us up to 2ndplace overall.  So, a particular well done to Mya Acharya (17th), Brook Traynor (34th) and Olivia Carey (35th). This was also Olivia’s first run for the club. “Didn’t she do well!”

It is important to remember that even if an athlete does not finish in the team top three scoring places they can still push down the scoring places of a rival club. That is what happened at Wicksteed. The team counting places went to Poppy Adkin who was an excellent 5th, Eve Rowley who was close behind on 9thand Matilda McGrath who was 16th. It was an excellent effort all round.

In the under 15 girls McKenzie Smith-Byrne finished a creditable 13thand she is now 9thin the overall rankings.  In the under 17 boys Charlie Combey was 24th. At the end of the day it was very wet, the guide tape had all blown away and it was almost dark but Charlie stuck to his task. That was a good effort, Charlie. Well done.