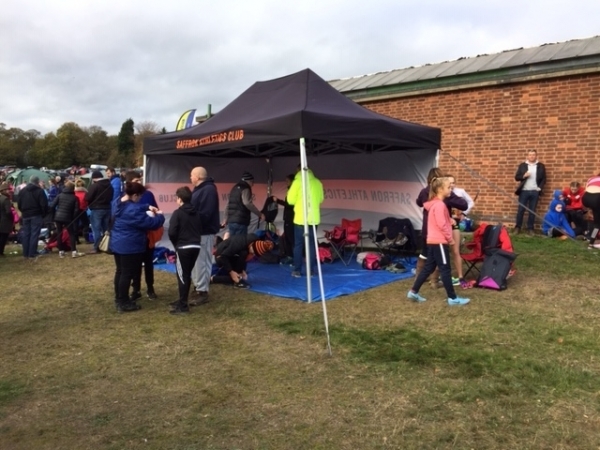 On a sunny day at Berry Hill Park Mansfield we were ready for the challenge of the National Cross-Country relays.

We had a fantastic turn out of athletes for this high quality race, with some of the best runners from around the country attending.

The day started off with Hannah Ord in the Junior women’s race where she ran a determined first leg to come in  17thplace. It was then down to the u17 girls to follow on from Hannah’s performance. Emma Richards gave her all to hand over in 65th place and it was down to Naomi Clarke-Myers to chase them down on leg two where she maintained the teams place.

The u13 boys fielded a full team with Danny-Ray Murdey on leg one and finishing in 66th place. He handed over to Kye Clarke-Myers, who had a solid place of 76th and finally it was down to Josh Pegg to finish it off for the team. Josh got them back up to 72nd place. Eammon Jille also had a solid run on leg one of the B team.

It was great to see that we had two u13 girls teams and the A team started of with Poppy Adkin on first leg who had a fantastic run to come 21st. It was then down to Mya Acharya to back up Poppy’s run and she did just that with a solid place of 39th. Eve Rowley (the predator) then pushed on to bring the team back up to 33rd. The B team, with all of the runners in this team having never competed in this event before finished in 83rd place, Matilda finished in 81st, Megan was in 75th place and Brooke completed the team placing in 83rd.

The u17 boys team had Jack Hurst finishing in 86th place on leg one and Charlie Combey finishing leg two in 77th place.

Mckenzie Smith-Byrne lead off the u15 girls team with her 75th place on leg one after not feeling very well in the week, but this did not deter Elsie Robinson on leg two as she powered through the field to bring the team back up to 17th. Eleanor Harwood had a solid run on the last leg for the team to finish in 39th place.

The final race for the club was the u15 boys and they did not disappoint, with solid performances from all three runners. Lachlan Finch led the way with a 77th place, then Alex Keeble moved them up to 64th and it was then down to Sam Wright and he held a solid 67th place, Jack Scott also ran a solid first leg in the B team.