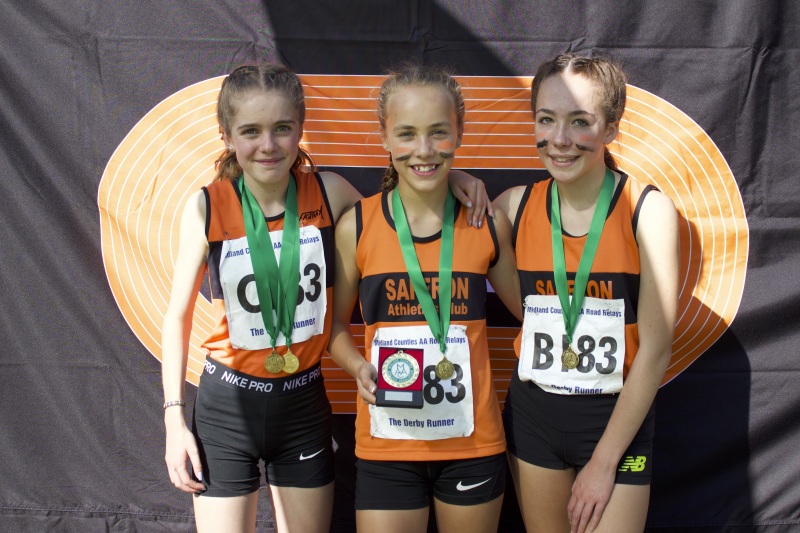 Magnificent Midland Road Relays
What a fantastic day of racing for our young athletes at the Midland Road Relays on the 21st September at Sutton Park.
The U15 girls set the stage alight with Poppy ‘the Popster’ Adkin attacking the first leg in the lead pack and coming in 7th place (15.02) with only a 40 second deficit to the leaders. She handed over to Eve ‘the Predator’ Rowley, whose second leg maintained the gap on the leaders though she picked off runners to move the team up to second place in a leg time of 15.18. Elsie ‘the Rocket’ Robinson set off on the last leg in the lead as Kettering Harriers AC did not have a last leg runner which meant the girls now had a lead of 33 seconds. Elsie got her head down and stretched the lead by 2 minutes and she crossed the line winning the team gold medal.  Elsie’s storming run saw her claim the fastest individual leg time of the day in 14.04. Our second u15 girls had an incomplete team and were in 18th place after two legs. Eleanor Harwood ran a solid first leg in 16.20 and McKenzie Smith-Byrne ran a solid second leg in 17.04.
The u13 girls team all ran well and just finished outside the top fifteen in 16th place with Matilda McGrath on first leg in a time of 16.53, Mya Acharya on second leg in a time of 16.47 and Megan Hughes on last leg in a time of 18.16.
The u13 boys team finished 21st with Ryan Butler on leg one running 15.16, Josh Pegg on leg two with a time of 17.20 and Kia Bolsover on last leg in 17.12.
The u15 boys also just finished outside the top twenty in 22nd place with runs from Lachlan Finch running 14.15, Sam Wright running 15.01 and Dylan Izzet running 16.55.
We had our first senior men runner Jack Hurst and he ran a very good leg in 22.22 against some of the top Midland senior athletes.
Race report by Rob Griffiths