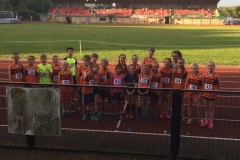 The hottest evening of the year greeted our athletes and what a lot of athletes were greeted. Over 20 of our younger athletes turned out for the Corby open meeting with the Majority taking part in the Mile race. This is a rare opportunity to compete in a mile race and a sea of orange vests competed magnificently. With a few apprehensive faces before the race and some of the athletes doubting there submitted times they went on to excel with the majority of the athletes smashing the times submitted. All of those who competed put in some great efforts and represented Saffron AC impeccably. Well done to all. Looking forward to seeing you all compete in the North Midlands cross country league.